We are deeply saddened to announce the loss of Chimpanzee Billy-Joe.

At over 40yrs old Billy-Joe was one of the longest standing residents here at Colchester Zoo and was very much seen as ‘part of the original zoo family’. Billy-Joe has always had a special place in our hearts after being re-homed at Colchester Zoo from previously being at a research facility.

Billy-Joe came to Colchester Zoo in the late 70’s aged approximately 6 years; she arrived at the zoo with few details about herself, indeed just a name! Billy-Joe quickly became a favourite with the resident chimps at the time as well as all the staff
she encountered and that pattern continued from
year to year, decade to decade.

On the afternoon of Wednesday 21st February, keepers were concerned for Billy-Joe as she was not using her right leg to walk and it became evident that there was swelling around her ankle. Due to Billy-Joe’s age and the risks involved of anaesthetising her vets initially prescribed some treatment to make Billy-Joe more comfortable and to assess her the following day. Unfortunately, there was no sign of improvement so the decision was made to anesthetise Billy-Joe for a medical examination and take x-rays to determine the problem and medical treatment required. There were no signs of a fracture however it was clear that Billy-Joe’s foot was cold and on investigation it seemed she was suffering from what we know as deep vein thrombosis in her lower leg, a blood clot stopping the blood circulation to her foot. For this diagnosis, treatment was prescribed to break down the clot and to reduce the likelihood of further clots developing. Keepers and vets remained positive for Billy-Joe and treatment was given along with space away from the other chimps to allow for her to rest.

Keepers monitored Billy-Joe closely and although small signs of improvement in her general demeanour, she continued not to use her leg. The team did all they could to help Billy-Joe but unfortunately there were limited treatments that would benefit her. After following a course of medication Billy-Joe was not showing signs of any further improvement and so on Thursday 1st March the hardest but kindest decision had to be made to put Billy-Joe to sleep and the inevitable was not pro-longed.

Billy-Joe came to Colchester Zoo with some unusual behaviours already ingrained such as a rocking motion which she would regularly display and a not so typical chimpanzee personality. However, despite Billy-Joe’s formative years in a research facility, since living at Colchester Zoo she became a mother to Tara and Kora, grandmother to Tekita and great grandmother to Tumba and Talia. Since having a family Billy-Joe displayed less rocking behaviour and spent time happily playing with the other members of her family, foraging, resting and grooming.

As well as her chimpanzee family, Billy-Joe was seen as part of the zoo family as she was resident at Colchester Zoo before the Tropeano family took over. Since then Billy-Joe has built a very strong relationship with her dedicated keepers who have always provided Billy-Joe with the care and attention she required to ensure a content and happy life.

Billy-Joe leaves behind a great legacy and was one of the zoos most treasured animal friends who will be greatly missed by many loyal supporters of the zoo too who regularly visited her but especially and most sadly missed by her dedicated keepers who she had a wonderful relationship with and all those that have cared for Billy-Joe since she came to Colchester Zoo. Billy-Joe will always be at the heart of Colchester Zoo’s family. 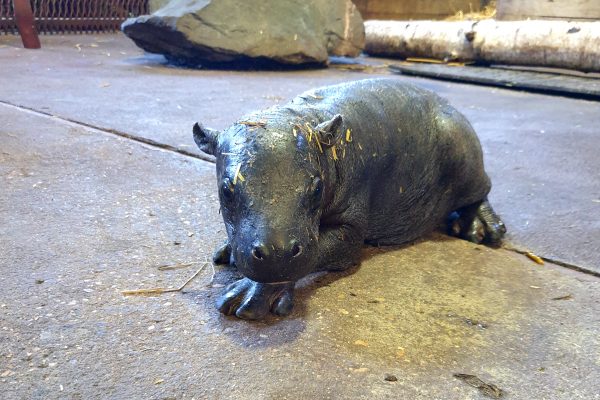