On the 31st October 2020, one of our female Mandrill monkeys, Mindy, welcomed her second baby into the world!

Mum and the little one are doing extremely well and the Animal Care Team have already been able to confirm that the new arrival is a male and have since named him Merlin! A younger brother for Mindy’s other son Miroku who is still within the troop.

Gismo, our dominant male, is dad to the new arrival and just like him Merlin will grow up to have a red nose, blue and purple ridges, red lips, a gold beard and a red rump! These fantastic colours are what make these monkeys the most colourful mammal in the world!

Mum Mindy would have gone through a gestation period of 180 days with the infant weighing less than a kilogram when born before clinging on tight to mum’s underbelly for the first few weeks of its life.

Here is Merlin at a few weeks old inside with mum Mindy as he begins to take in his surroundings!

Mandrills are very social and live within groups known as a horde or troop, they are also the largest monkey in the world.

Sadly the species is currently listed as vulnerable on the IUCN Red List and so this new arrival is great news for the conservation of its species not just for Colchester Zoo.

We hope you will be able to spot the new arrival when the Zoo reopens!

Can you spot our tiny new arrivals!?

Can you spot our tiny new arrivals!? We are... 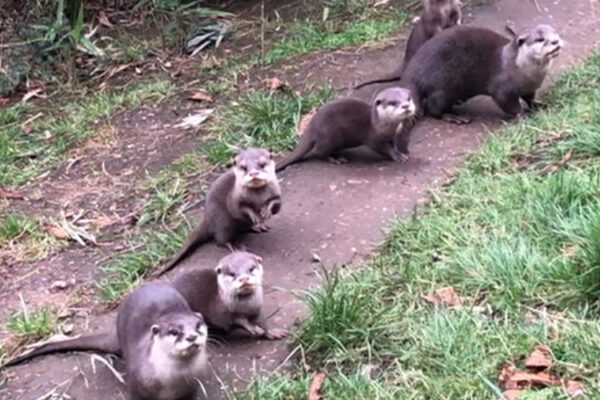 Otter pups are named! Thanks to your votes our...