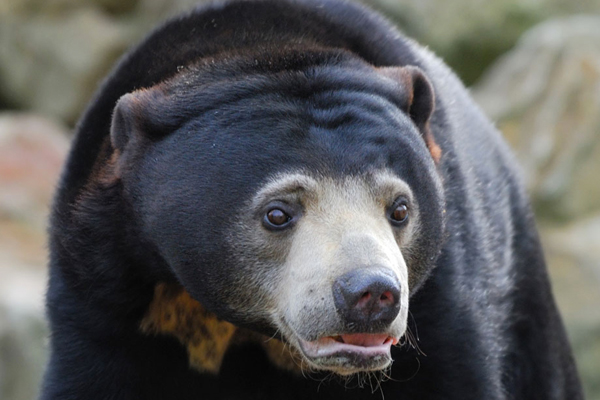 Our two sun bears arrived at Colchester Zoo in September 2010. Both bears were confiscated by Government Anti-Poaching Patrols in Cambodia in 2007 and 2008 respectively.

A lot of time, money and thought went into their modern enclosure, and also into making sure that our sun bears have a home suiting all of their physical and behavioural needs; providing an exciting and diverse habitat.

Jo-Jo and Srey Ya have a large outdoor area for them to explore, along with an indoor area consisting of a waterfall and climbing frames for enrichment. Both the indoor and outdoor areas for our sun bears have public viewing areas, but Jo-Jo and Srey Ya also have the opportunity to retire to their own private, off show, sleeping quarters.

Both bears were confiscated by Government Anti-Poaching Patrols in Cambodia in 2007 and 2008, with Srey Ya found in a village, weighing just 300 grams so young she had not yet opened her eyes when she was confiscated and also suffering from pneumonia. Jo-Jo was rescued from a bar where he was being kept as a pet to amuse visitors at just 6 months old.

Animals in Bears of the Rising Sun

Area:
South-eastern Asia, the Malay Peninsula, Sumatra and Borneo
Status:
Vulnerable and listed on Appendix I of CITES
Quick Fact:

The sun bear, also known as the dog bear or honey bear, after its love of honey, is the smallest of the eight bear species. It is black with a golden crescent marking on its chest which, in ancient Eastern folklore, represents the sun.

Call of the Wild

Kingdom of the Wild